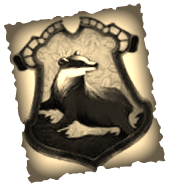 Hufflepuff is one of the four Houses of Hogwarts School of Witchcraft and Wizardry. Founded by Helga Hufflepuff, a medival witch and one of the 4 founders of the magical school.

Hufflepuff is the most inclusive among the four houses; valuing hard work, patience, loyalty, and fair play rather than a particular aptitude in its members. Its emblem is the badger and colours that of yellow and black.
It is known that Hufflepuff corresponds roughly to the element of earth.
To get into the common room, rather than giving a password you must tap a fake barrel in the rhythm "Helga Hufflepuff." It is the only common room to have a way to keep students from other houses out (by dumping vinegar on them).

Hufflepuff is named b the surname of its founder: Helga Hufflepuff and the actual word 'Hufflpuff' can mean either huff and puff, which shows defensive and aggressive qualitys like our emblem the badger or it can be translated bit by bit. Thus, Huff means to breathe and Puff is a Medieval word for pastry, which together would mean to exude sacred sweetness or something along those lines. This could be a referance to Hufflepuff's kind and loyal nature.

Over a thousand years ago, the four greatest witches and wizards of the age shared a dream, to create a school where young people of magical skill could study and be trained in the magical arts they needed to become skilled, fully-trained wizards. These four great wizards each founded one of the House of the school that they worked together to form: Hogwarts School of Witchcraft and Wizardry.
For a number of years, this arrangement worked just fine. Each of the founders took a group of students to be in their own house and even though they had differences of opinion about who should be trained, the house system helped them all to work together. However, as the years went by, the differences between Gryffindor and Slytherin became a serious rift. Eventually Slytherin left the school.