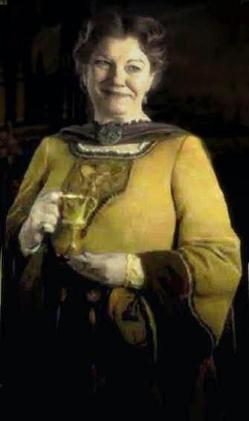 Now, Helga Hufflepuff was a medival witch who came, we think, from Wales. Helga Hufflepuff was one of the four founders of Hogwarts School of Witchcraft and Wizardry.
As for her relationshops with the other founders- she was a known friend of Rowena Raveclaw and was on good terms with Godric Gryffindor. Helga was known to not be on great terms with Slytherin but there was no heated rivalr such as that between Godric and Slytherin as sweet Helga was a mellow and kind soul.

Hufflepuff helped to build the school, and admitted students into her House that were loyal, fair and unafraid of hard work. NOT A LOAD OF DUFFERS!
*Ahem* While the other founders took students based on either ambition, bravery, or intelligence, Helga Hufflepuff took the rest, treating them all equally and teaching them all she knew. She brought people from different backgrounds together to help in the building of the school and thus created new friendships and forged new links in previously difficult relations, and was known for her charming ways.

Helga Hufflepuff was known for a gift for food-related Charms, and her recipes are still used as the basis for many Hogwarts feasts ( which is more than say other houses contributed...except perhaps Salazar who kindly donated a Bazalisk to kill students).

Helga Hufflepuff also arranged for the house-elf contingent to work in the kitchens, giving them somewhere safe to work where they would not be mistreated or abused. She was an avid campainer against the harsh treatment that house-elves regualrly recieved and Hogwarts was a sort of haven for them.

Helga Hufflepuff lent her name to one of the four Houses of Hogwarts School of Witchcraft and Wizardry, Hufflepuff of which is the one we belong to. She does not appear to have applied particularly strict standards of selection to her house, which sets her apart from the other founders by making her an egalitarian and not selective and loving everone for who they are, not based on what qualities they have!

Helga Hufflepuff is a round and plump woman. She usually wears a dress in mainly yellows or golds. She had red hair and shining blue eyes.
Hufflepuff favoured loyalty, honesty, fair play, and hard work. Members of Hufflepuff usually display at least one of these traits in varying degrees.  Additionally, Hufflepuff was renowned for her compassionate nature; she took in the house-elves to work in Hogwarts Kitchen where they could work in peace and safety, and while the other founders were careful in selection of students, Hufflepuff took in the rest showing a kind heart.