THE VALUES OF HUFFLEPUFF

Hufflepuff is the most inclusive among the four houses; valuing hard work, patience, loyalty, and fair play rather than a particular aptitude in its members. Students belonging to this house are known to be hard-working, friendly, loyal, honest and rather impartial. It may be that due to their values, Hufflepuffs are not as competitive as the other houses, or are more modest about their accomplishments. Hufflepuff appears to have the least rivalry with the other houses, except in Quidditch.

There may be a few cases where an individual doesn't "make the cut" to any other house so they are just stuck in Hufflepuff house. But for the majority of us, it isn't that we didn't make the cut that puts us in Hufflepuff, It’s because we hold some of the qualities of ALL the houses. We are BRAVE like Gryffindor's, we will stand up and fight for what we believe in and we will sacrifice ourselves for the one's we love. Yet we may not be bold enough to walk into a forest alone to meet death. We are INTELLIGENT like Ravenclaw’s, but we define ourselves as more than that. We know how to work hard and we know how to play hard. We are smart, but we find the fun in life's little adventures. There is more to us then being the smartest and living our lives with our noses in a book, we know there is more to life than that. We are AMBITIOUS like Slytherin's, have high goals for ourselves in life, and strive to do our best to make these goals a reality. Yet, we won't push other people over or step on them in order to obtain these goals. We hold ourselves up with dignity and respect and do what we know is right to reach our goals.

Therefore, I don't feel its what we LACK that puts us in Hufflepuff House, I think its just because we are too awesome and have all the qualities that would suit any house. So they just put all the Hard working, Loyal, Brave, Smart and Ambitious one's together in a house of pure awesomeness. Hufflepuffs value dedication, patience and hard work. In Albus Dumbledore's words, they are "fierce friends." These qualities are nothing to sneeze at. Instead of looking at Hufflepuff as the house of the wizarding world's rejects, look at it as the most inclusive house, the least pretentious, the least judgmental. We have seen Gryffindor and Slytherin's centuries-long rivalry, and in my humble opinion, Ravenclaw is just a bunch of glorified nerds. 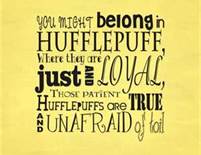 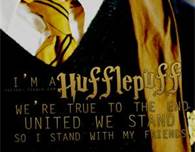